Conference: Burmese in Europe – Promoting Partnership for Transition in Burma 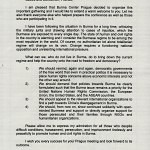 This conference sought to bring together Burmese pro-democracy activists and scholars from various ethnic groups with policy makers and interested individuals from the Czech Republic and the EU. The aim of the conference was formulated as follows:

The proceedings can be found in the 2009 issue of Focus on Burma.