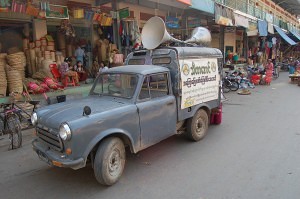 Burma, which was renamed by the junta in 1989 to “Myanmar”, is situated in Southeast Asia between India, China and Thailand. Since the coup in 1962, a military regime has been ruling in Burma under different names and state models. In 1988, thousands of Burmese had to pay with their lives for demanding democracy and economic reforms. In 2007, monks and their supporters were shot and bludgeoned off the streets in another wave of protests against the junta. The following year, Burma featured in the headlines when Cyclone Nargis devastated the Irrawaddy Delta and took the lives of many tens of thousands. The world was shocked to see that in the aftermath of the cyclone the regime refused for several days foreign aid for the country.

With its leader Thein Sein, a former general, the Burmese government initiated a series of political and economic reforms. In 2015 the transition to democracy received a major boost when the NLD won the majority of seats in both parliaments. The former opposition leader Aung San Suu Kyi became a State Counsellor. The army, however, kept several key ministries and a de-facto veto right regarding changes to the constitution, and it also reserved the right to re-assume power any time.

Extensive reforms were brought on the way. Some long-ongoing issues are still waiting for a solution, while some of them, like the discrimination of the Rohingyas, have even deteriorated to humanitarian crises.