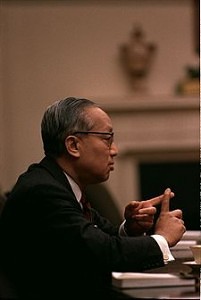 U Thant was born in Pantanaw in Burma’s Irrawaddy Delta. He started his career as journalist, writing comments and articles for Burmese newspapers and magazines. In the year 1948, after Burma gained independence, U Nu apointed him the director of the Burmese radio.

In the years 1957-61 he represented Burma at the UN. After the death of Secretary Gneral Dag Hammarskjold, U Thant was unanimously appointed his successor in 1961 and became the first Asian on this post. During his tenure the UN had to deal with several global crises: the Cuba Crisis, the civil war in the Congo, the Six Day War in Israel, the Prague Spring, the Indo-Pakistani war of 1971, and the Vietnam War. U Thant considerably promoted the establishing of the UN development and environmental agencies and was known as firm opponent of apartheid in South Africa.

U Thant died on November 25, 1976. His burial became a political incident in Burma when the military regime under Ne Win refused to hold a state funeral. Instead, a funeral was arranged for December 5 on an ordinary cemetary in Rangoon. When the coffin was carried through the town, a crowd of angry Burmese abducted the body and brought it to the Rangoon University where it was buried. Six days later, on December 11, 1974, Burmese security forces violently raided the campus and took the coffin. During this assault, several dozens of students have been killed.

author: MTD, 2009
image and updated with information from Wikipedia

1 The prepended honorific “U” is not actually part of the name but it is used in Burmese language when respectfully addressing a man. In Burmese, names are used without a prefix only when talking to or about little children.