Burma (Myanmar) – the original official name “Union of Burma”, since 1989 “Union of Myanmar” (Now the Republic of the Union of Burma) – is situated in South-east Asia. From north to south, Tibeto-Himalayan Mountains stretch along the border; in the south-west and south, Burma borders the Bay of Bengal and the Andaman Sea. The neighboring countries in the west are Bangladesh and India, in the north and north-east China and Laos, and Thailand to the east. Burma’s capital has been recently moved from Rangoon (Yangon) to Naypyidaw, formerly a small town 400 km north of Rangoon on the railway line to Mandalay.

Burma is the second largest state in Southeast Asia, its area being 678,033 km2, that is 5 times the size of the Czech and Slovak Republics together. 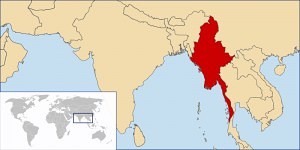 Burma is divided into 7 divisions of Burma Proper and 7 states of the national minorities – Kachin, Karenni, Karen, Chin, Mon, Arakan and Shan States.

The population of Burma is estimated over 60 million, the largest ethnic group being the ethnic Burmese (aka Bama or Burmans), comprising 68% of population. The prevailing religion is Buddhism, the official language is Burmese.

Since 3,000 B.C., groups of Mon-Khmer, Tibeto-Burmans, and Sino-Thai population began to move to the Indo-Chinese Peninsula. The Mons came to Lower Burma in the 5th and 6th century A.D., founding Thaton and Pegu. Before that the Pyu (of Tibeto-Burmese origin) who came in the 3rd and 4th century A.D. – founded Sriksetra. In the 8th – 9th century A.D., the Burmese came to central Burma and founded Pagan, which, between the 11th – 13th century, became the capital of the first Burmese state. Buddhist culture flourished and great number of pagodas was built (many of them preserved until today).

From the 13th to the 18th century, Shans from the Sino-Thai group began to penetrate into Burma, founding centres like Ava and Toungoo.

The Konbaung Dynasty (1752 – 1885) was the last period of the independent Burmese kingdom. In the 19th century the British started to penetrate into Burma and gradually, in the 2 Anglo-Burmese Wars (1824 – 1826, 1851 – 1852) conquered the southern parts of Burma. In the Third Anglo-Burmese War in 1885 the British conquered the royal city of Mandalay, dethroned the last King Thibaw, and took him to exile in India.

In the colonial era (1885 – 1941) Burma became a province of British India and was only separated from that country in 1937. During the colonial period various opposition forms and resistance against British colonial rule appeared: in 1920 the students at Rangoon University went on strike; in 1930 – 32 the peasants of Saya San rebelled;  in 1930 the Dobama (“We Burmese”) organization was formed; and in 1938 the oil workers in Yenangyaung went on strike.

During the Second World War the group of “Thirty Comrades”, headed by Aung San prepared for fight in Japan and in December 1941 the Army of Independent Burma was formed in Thailand. During the war Burma was occupied by the Japanese who proclaimed formal “independence” of Burma on 1 August 1943. The Burmese army was re-named Burma National Army. But soon anti-Japanese resistance and a national liberation movement against the Japanese was formed. In August, 1944 the Anti-Fascist People’s Freedom League (AFPFL) was founded, secretly establishing an agreement on military co-operation with the British against the Japanese. On 27 March1945 the Burmese National Army, together with the AFPFL, started an armed uprising against the Japanese. On 1 May 1945, Rangoon was liberated and the AFPFL gradually took over power.

On 10 November 1946 the AFPFL issued the demand for independence. The British government was forced to negotiate and on 27 January 1947 the “Aung San – Attlee Agreement” was signed in London, giving Burma the right to establish independence. In February 1947 an important conference took place in Panglong in Burma.  At this conference, the Burmese reached an agreement with national minorities on forming a federal state, giving national minorities the right of autonomy within Burma. In April 1947 elections to the Constitutional Assembly took place and on 4 January 1948 the independent Union of Burma was proclaimed. General-Major Aung San, the “Father of Independence” could not, however, be its first leader, because on 19 July 1947 he was assassinated, along with six other members of the governor’s council. U Nu, the leader of the AFPFL, became the first Prime Minister.

Since its very beginning, the Union of Burma was troubled by civil war. The civil war began with an armed struggle amongst the two Communist Parties (the extremist Red Flag and the White Flag Communist Party), various organizations, and armed groups of the national minorities who wanted more rights. This situation led the Burmese army, under the leadership of General Ne Win, to the take-over of power in 1958 – 1960. After the short period of U Nu´s government (1960 – 62) Ne Win headed a military coup d´ état in 1962. Since that time the military junta has been holding power. It founded the Burma Socialist Programme Party (BSPP) which proclaimed the “Burmese Way to Socialism”. The Party ideology was a mixture of socialism, Buddhism and isolationism. Junta continued fighting in the civil war and severely suppressed all opposition. Up to the end of the 1980s socialist countries co-operated with the junta, in the 1960s and 1970s the Czechoslovak Socialist Republic was active as well.

By the end of 1980s the economic situation of the country had deteriorated. Burma, which had once been seen as a “rice-bowl” of Asia and despite its great wealth of natural resources – wood, coal, oil, gas, tin, wolfram, lead, zinc, silver, copper, nickel, rubies, sapphires, emeralds – became one of the poorest countries of the world. One notable result of the socialist economic policy was the growth of the black market and a total shortage of all kinds of goods.

Due to the deterioration of the economic and political situation abroad a pro-democracy movement developed in 1988. Its leader became the daughter of General-Major Aung San, the charismatic Aung San Suu Kyi, who founded the National League for Democracy (NLD). Throughout the summer of 1988 demonstrations took place and on 8.8.1988 the movement for democracy was brutally suppressed in a scene of bloodshed in Rangoon.

However, circumstances forced the government to admit democratic parliamentary elections in May 1990. The National League for Democracy gained over 80% of votes. Despite overwhelming public support for democracy, the military junta never allowed the parliament to be called to take over the power. Instead, it arrested and jailed the leading members of NLD and the leader Aung San Suu Kyi was put under house arrest. In 1991 Aung San Suu Kyi was awarded the Nobel Peace Prize for her effort to introduce democracy to her country.

The next election was held in 2010, twenty years later, and this marks an important step for Burma in its transition from military junta to a formal democracy.  However, widespread suspicion of its legitimacy still remains. The main point of criticism is the non-democratic constitution, securing extensive privileges for the army and approved in a referendum in 2008, which observers have repeatedly called undemocratic. In March 2011, a nominally civilian government was launched by President Thein Sein, who previously served as a general and then as a prime minister under the junta regime. After the 2010 election, Aung San Suu Kyi was released from house arrest, won a parliamentary seat in the 2012 by-election, and her party, NLD, swept most of the available seats in the parliament as well. Nevertheless, according to the constitution currently in place, a quarter of seats in both upper and lower parliaments are reserved for the military. Three major ministerial posts – interior, border and defense affairs – must be served by generals.

Although a complete and successful transition to a civilian and grassroots democracy still needs time, a series of reforms by the new government facilitated the end of international isolation under which Burma lived. In December 2011, US Secretary of State Hilary Clinton paid a visit to Burma, followed by US President Barack Obama’s first visit to Burma, marking Burma’s return to the international stage. In April 2012, EU lifted all non-military economic sanctions on Burma, with European Commision’s developmental aid later in the year.

General elections were held on 8 November 2015 in which the NLD won the absolute majority of seats in both chambers of the national parliament. The new party’s power, however, is still restricted by a defacto veto right of the army who controls a fixed 25% of the seats.

On 15 March 2016, Htin Kyaw was elected as the first non-military president since the military coup of 1962.

Currently, the country makes international headlines because of the Rohingya, a Muslim group of estimated 500,000 who are being denied basic rights and who are targeted by racist groups. A huge number of refugees were forced out of the country by armed violence and is now staying in Bangladesh. Further issues concern the stagnating peace process together with ethnic armies, corruption and deficiencies in the rule of law.