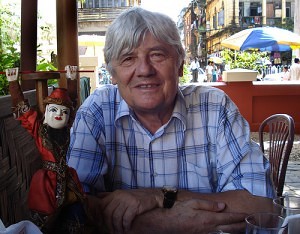 PhDr. Jan Bečka,C.Sc., philologist, historian and political scientist, died at the age of 76. He worked as a scientist in the Oriental Institute of the Czechoslovak (later Czech) Academy of Sciences in Prague, served as the first Ambassador of the Czech Republic in Thailand, accredited for Burma, Cambodia and Laos in 1996-2000.

Jan Bečka graduated at the Philosophical Faculty of the Charles University, Prague in Burmese, English and Czech in 1962. During 1958-60 he studied at the Rangoon University in Burma. In the years 1964-1995 and 2003-2012 he was a scientist in the Oriental Institute of the Czechoslovak, later Czech Academy of Sciences in Prague, specialising in modern history of Burma and South-East Asia, contemporary problems and the influence of the Buddhist religion on politics, society and culture of South-East Asian countries.

He also was an external teacher of Burmese at the Philosophical Faculty of the Charles University, Prague in 1965-68 and in 1981and in 2012-14 he was a lecturer of South-East Asian history at the Metropolitan University, Prague.

In his studies he dealt with the latest history of Burma from the second half of the 19th century – since the British annexation of Burma to the present, especially the thirties and forties of the 20 th century. He was interested in the anti-colonial movement, the fight against the Japanese in 1941-45, namely the foundation and development of the Burmese National Army and its leader Major General Aung San (father of the Nobel Prize winner Daw Aung San Su Kyi), who was assassinated in July 1947 before the independence of Burma was proclaimed in Jauary 4 th l948. Thanks to his knowledge of Burmese, Jan Bečka was able to study many sources – documents of political parties, speeches of politicians, memories, autobiographies etc.- in the original, not only in world languages like many other historians.

Jan Bečka also contributed studies to various proceedings – e.g. Subhas Chandra Bose and the Burmese Freedom Movement, in S.K.Bose (ed.) Netaji and India´s Freedom, Proceedings of the International Netaji Seminar, Calcutta 1975,p.54-75 or Buddhist Revival in Post-Independence Burma: A Study of Interaction of Religion and Politics(1948-62) in: Vavroušková S. (ed.)Religion and Society in India and Burma, Prague 1991,p.7-32 and articles in Archív Orientální like Planning for New Burma : Major General Aung San´s Views of Economic Development, ArOr 56,1988,1, p.1-15, or The Military and the Struggle for Democracy in Burma: The Presentation of the Political Upheaval of 1988, in the Official Burmese Press, ArOr 61,1993,l, p.63-80 and others.

Jan Bečka reached the climax of his research on Burma in his book Dějiny Barmy (The History of Burma), Praha, Lidové noviny 2007,430 p. This book brings a rich material on Burma of the past and present, a chapter on mutual relations of Czechoslovakia, later Czech Republic, and Myanmar (Burma). There is a rich addenda – a chronological survey of important events, statistics, graphs, maps, photoes, index, an immensely rich bibliography and a useful survey of Burmese terms and transcription of Burmese names and words into Czech. This book is a basic work for all people seriously interested in Burma.

The unexpected death of Jan Bečka is a great loss for Burmese and Oriental studies.

A detailed bibliography of Jan Bečka‘s work is in his book Dějiny Barmy, Lidové noviny, Praha 2007 and in Kdo byl kdo (Who was Who)čeští a slovenští orientalisté, afrikanisté a iberoamerikanisté, Libri, Praha 1999.