International women’s networks are today launching a campaign to free women human rights defenders in Burma, highlighting activists detained during the recent crackdown. Beginning on November 25, the International Day for the Elimination of Violence Against Women, women’s networks will be calling for the release of all detainees by December 10. Out of those arrested during last September’s violent crackdown on peaceful protests led by monks, 106 women remain in detention, including six nuns. 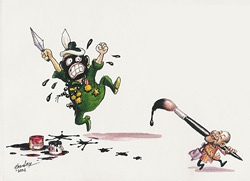 The Czech non-profit organization Burma Center Prague announces the opening of an exhibition of Burmese political cartoons in Prague on 2 November. This event will be the first time that these unique examples of “defiant humor” by the renowned dissident and artist Harn Lay can be seen in the Czech Republic.

Over 450 express support of Burmese protesters / Havel, Albright, Wolfowitz and Milinkevich among first to sign

More than 450 participants of the conference Forum 2000 in Prague, Czech Republic, signed during one day the “Declaration in Support of the People of Burma” of the organization Burma Center Prague. The undersigned express their sympathy with the protesters for democracy in Burma, condemn the extreme use of violence by Burmese military forces and demand immediately to release political prisoners and to give information about their whereabouts. They also urge China, Russia and India to cease supporting the Burmese regime and call for an international arms embargo on Burma.

Events of Burma Center Prague in support of Burmese Democracy movement on 17 and 19 June 2006 in Prague.