Our Work in Numbers

We are here to help since 2006. Based in the center of Europe, we work here and in Burma (Myanmar) and neighboring countries.

projects since we set off

assisted refugees in the Czech Republic

Your Gift Has a Lasting Impact

Over the past few years, Burma has undertaken dramatic reforms and is now in a critical time of transition.

During the rule of the junta, dissent was suppressed with brute force. Now, however, journalists, human rights activists and their defendants are policed by elastic laws, and inequality among the people follows along economic, educational, and ethnic divides.

The opening of the country has brought about new issues, like the impact of mass tourism, but also fresh chances to tackle old problems, such as fighting against HIV/AIDS, improving the capacity of self-support groups, and promoting religious tolerance.

The Burma Center Prague was established by individuals who felt personally concerned about the situation in Burma. We therefore choose our priorities according to real needs and don’t follow in the trails of politicians and investors.

Our projects are not a one-size-fits-all template imported from other regions, but carefully tailor-made for the particular settings, in close cooperation with local communities. We are people from Burmese and European backgrounds, and we have always chosen to closely cooperate with local partners and to empower them, rather than just employing them as service providers.

Burma is our second home, and we are committed to making a difference.

All funds are used in accordance with our legal status as a registered non-profit organization and in line with our mission, with full accountability for our activities.

Donations are used to implement and manage our projects and related necessary activities, like awareness raising or networking. We have a proven track record of maximizing the benefit for the target population and creating sustainable solutions.

You can find all important updates in our regular newsletters.

Major donors will also receive special opportunities to gain personal insights into our work and access to Burmese key events and meetings. 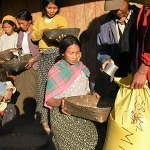 From September 2009 to July 2012, we raised 394,541Kč (approx. €14,500 or US$16,000) from individual donors to help the famine-affected population in Chin State, Burma’s poorest region. Thanks to the close cooperation with affected communities, costs for distribution were extremely low and 95.7% of the funds were used to buy rice and medicine. Over 35 metric tons of rice reached more than 3,700 people.

Is your organization subject to audits?

Yes. As a legal requirement, our finances are regularly scrutinized by an independent auditor. Additionally, our executive and supervisory boards constantly monitor our activities.

Is my donation secure?

Donations are processed by darujme.cz, a platform operated by the NGO Via Foundation. and supported by the Vodafone Foundation.

We and our payment providers operate under strict Czech and European privacy laws. Your details will only be used for the agreed purpose.

Is my donation tax-deductible?

As a registered non-profit NGO, we are able to issue receipts that can be used for Czech tax offices. In other countries, however, different requirements my apply.

Can I support a specific activity?

Please contact us if you prefer to support particular ongoing activities.

Are there other ways to support you?

We also sell fair trade items produced by Burmese refugees, t-shirts and other merchandise. You can find us at our events, or contact us for an appointment in our office.

Please make sure you first check our FAQs.

Please allow a few business days for us to get back to you.

figures in statistics as of August 2015